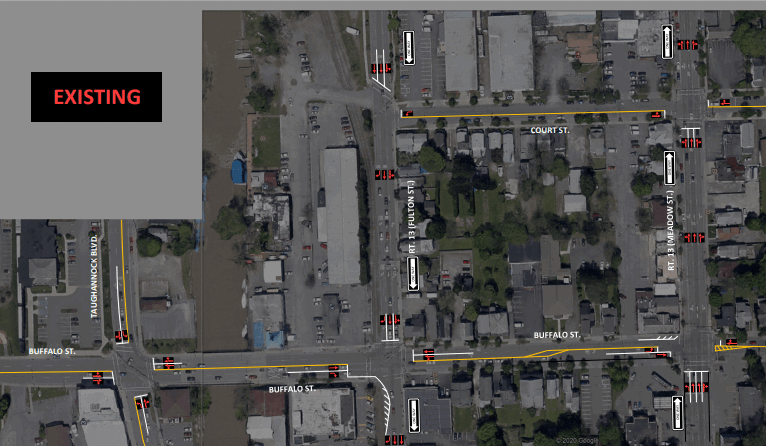 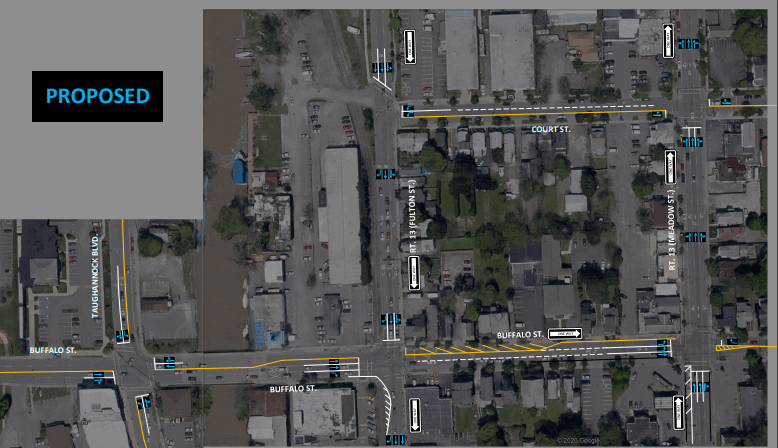 The Ithaca City Planning and Economic Committee reviewed three proposals early Wednesday evening. The first was a proposal to permanently alter traffic patterns in an effort to mitigate future congestion at the start of upcoming developments; the second regarded possible City of Ithaca Community Investment Incentive Tax Abatement Program (CIITAP) and the last was a vote on plans for a new trail head at the southern end of Black Diamond Trail.

The first two items are likely to impact the greatest number of people living in and around Ithaca, with the first also impacting those who frequently travel into Ithaca as well.?

As it stands, the proposal suggests changes to the 700 Block of West Buffalo Street from a two-way east-west street to a one-way eastbound only street. That change would only occur between Fulton and Meadow Streets. Then, one block north, the 700 Block of “Court Street would either be converted to a one-way westbound route or otherwise expanded to increase westbound traffic capacity.”?

Without a change, the NYS DOT will not consider the Break-In-Access (BIA) and other pedestrian improvements proposed for Rt. 13 unless it sees a traffic congestion mitigation strategy carried out. According to the DOT’s study, “preliminary analysis suggests that the proposed changes will result in a significant reduction in travel times at the peak hours as well as a reduction in certain kinds of crashes.”

The DOT has been interested in rerouting traffic for some time, but the city must also consider how this plan might impact emergency response teams, the long-term waterfront development set in the West End and the impact of traffic flow through residential neighborhoods.

Potentially, by building the contingency into the plan that would affect City Harbor and the Carpenter Park developments and other pedestrian-focused improvements to state-owned Route 13 without the new traffic plan, they might pressure the city to acquiesce to their ask.

Cynthia Brock provided an excellent point on the changes that had already been made to Court St. in order to make it a bicycle-friendly street, and suggested that the committee take the fullest time to consider the costs the new changes might incur. The committee moved to bring the vote back to Common Council after the official plan had been finalized by the DOT, in addition to tabling the project for a month until a public hearing on the matter is held.?

The original plan supported that the plan would go into effect after further study without revisiting Common Council for an additional sign-off.?

Two letters were received prior to discussion on the matter in opposition of the project. One was from West Hill resident Dave Nutter, and the other from an Enfield lawmaker who said that the project worsen traffic in the outbound commute, and instead recommended additional bridges. West Hill, Washington Square and Downtown look to be impacted most by the changes, but if the additional analysis proves effective, a local approval path will be determined by early next year.?

The first proposed revision to the CIITAP was procedural. Typically, the city's vote to endorse a tax abatement application is non-binding and the Tompkins County Industrial Development Authority (IDA) can make the final call. The city typically only reviews the application, hosts a public hearing and chooses whether or not to endorse the application which will be voted on by the IDA.

Unfortunately, the county and city's applications, while similar in most respects, contain critical inconsistencies. The inconsistencies have already resulted in delays and confusion among applicants and altogether the city’s requirements are more restrictive than what the county asks, which was highlighted too by Brock.?

Two solutions have been proposed to resolve the issue: either the city can tell the IDA that it endorses any projects that meet its criteria and eliminate the city's application overall, thereby making the IDA the sole decision-maker, or the city can maintain its own review process in a more simplified capacity: focusing on location, density, size and municipal compliance while the IDA focuses on diversity, local labor and housing requirements.

Chair Seph Murtagh expressed support for the opt-out fee, suggesting that it provides support to developers who are not so experienced with building affordable housing. Donna Fleming agreed and added that it may be possible to increase the cost of the opt-out fee. Others on the committee remained somewhat unconvinced, but offered concerns about another potential for ghettoizing if developers are allowed to develop the housing off-site.?

New York State is planning a new trailhead on the southern end of the Black Diamond Trail, where the trail meets up with the Cayuga Waterfront Trail in Cass Park. Approval has been granted for a 2021 construction, but the Common Council still needs to sign off on the 25-year ownership and maintenance agreement with the state.

The committee voted unanimously in favor of the construction. The park will be named in honor of the late Andrejs Ozolins, a West Hill resident who was a strong advocate for the trail and the local cycling community.

Glenn Epps is an Ithaca College alum who's held previously held positions at The Ithacan as a reporter and podcaster, Rev: Ithaca Startup Works, and Ithaca's Kitchen Theatre Company. He's an active tweeterhead at glenn_epps_.

after over 40 years as a resident of the county and working in Ithaca i get frustrated with all the concessions to bicycles. First is the rare compliance with laws on the books concerning traffic rules[how many time do we see cyclists nip onto sidewalks then back to the roads, or ignoring traffic lights?] Then there's the weather,,remember "winter"? Cycling in slush and the infamous city streets needing plowing? I have no idea of the cost to slice and dice Hector St but i DO know the cost of struts and ball joints for my car. How did that NOT get paved? Oh, but there IS a bike lane.. Being "green" is good, but over the decades, treatment of car traffic has been very poor. There WILL be cars, period![hey IPD, get the cell phone users, please?]