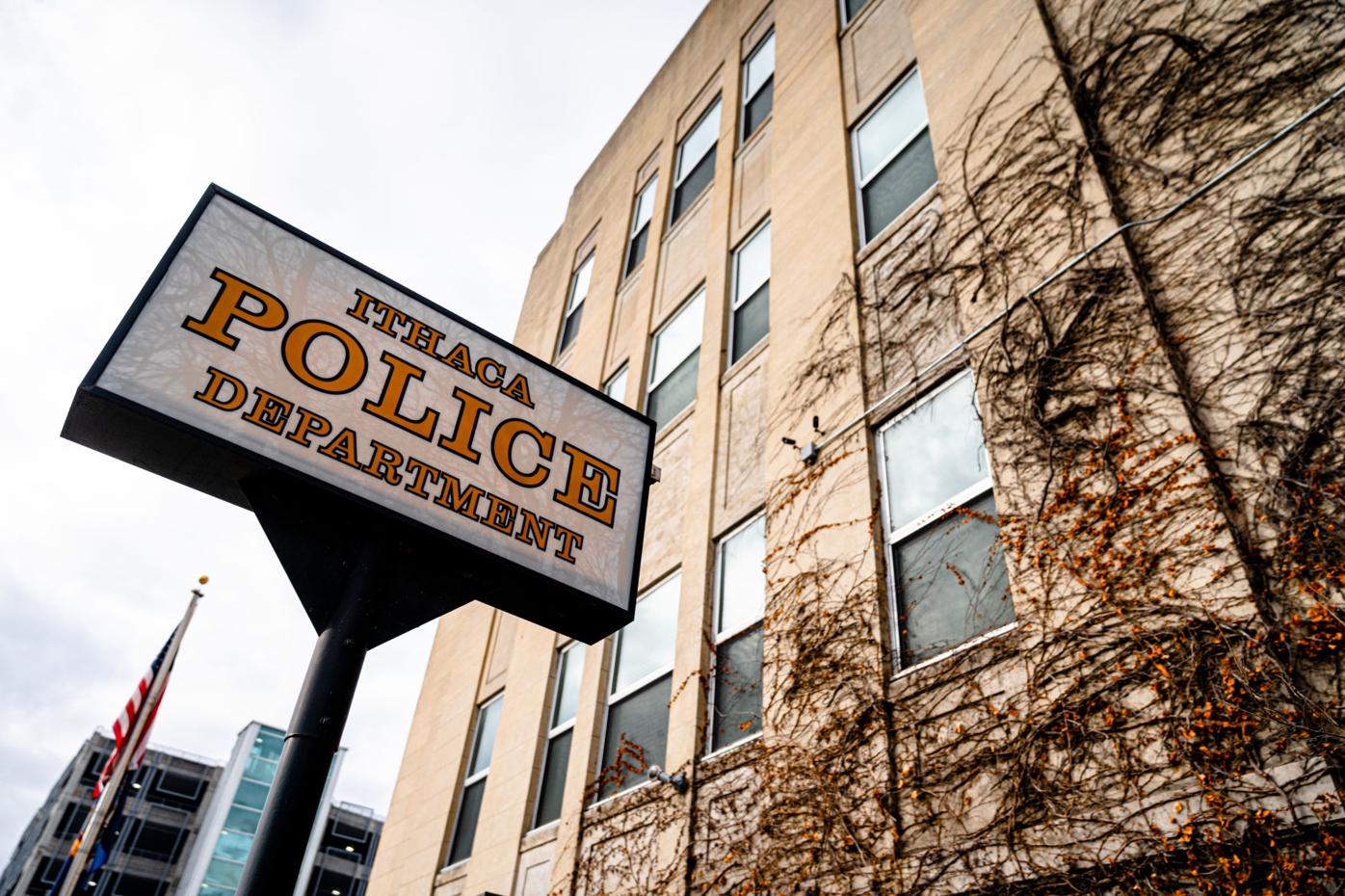 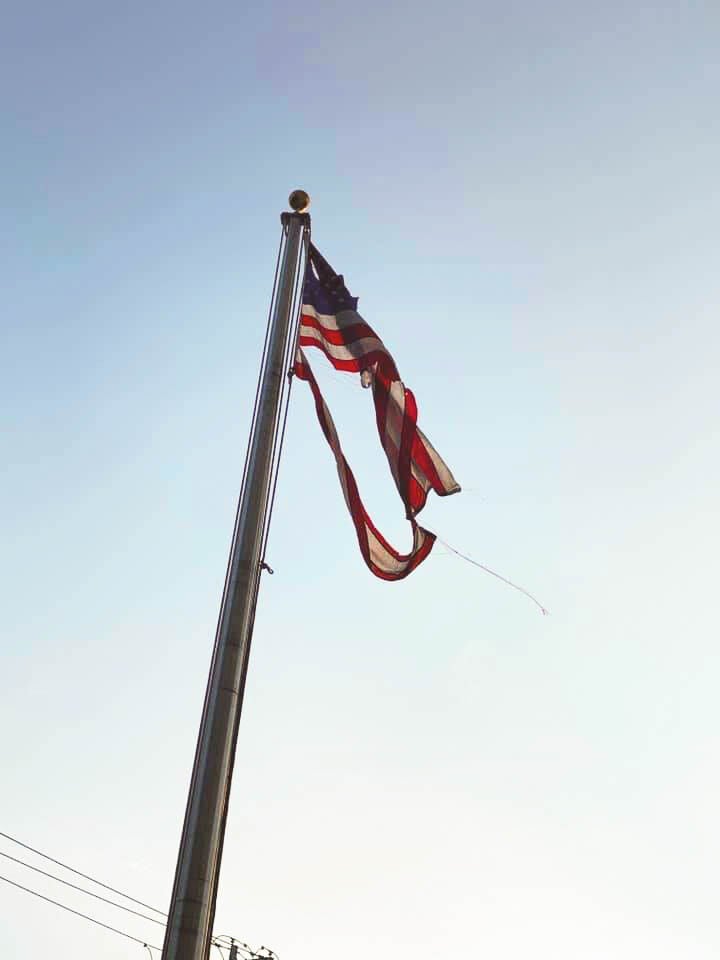 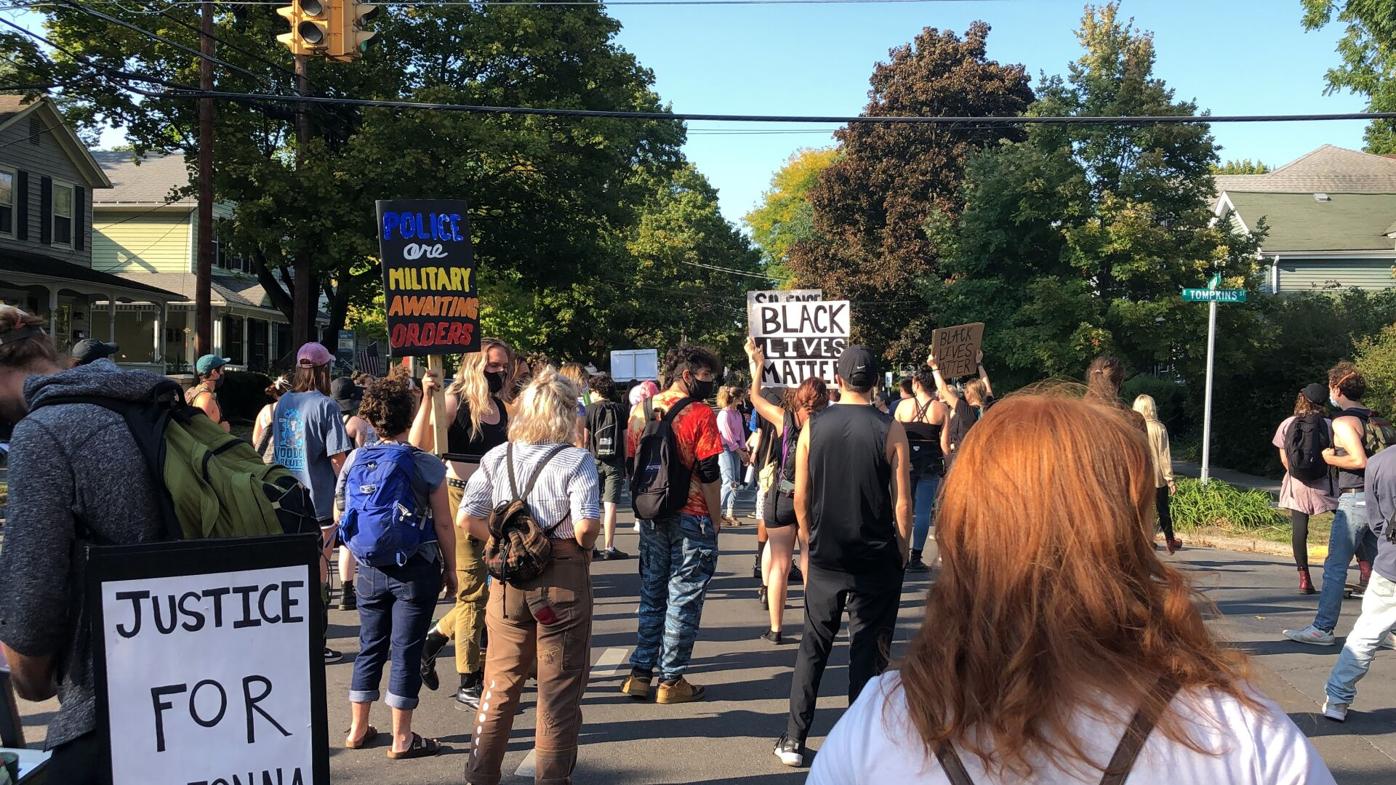 ITHACA, N.Y. – Sunday’s protest took an unprecedented turn toward the destructive and provocative with the burning of the American flag, and the City is responding.?

On Sept. 27, protesters gathered outside Ithaca Police Department, removed the American flag that flew outside the station, shredded the national symbol, burned it and rehung the tattered and charred fabric.?

In a statement, Mayor Svante Myrick responded to the flag desecration and called the protesters’ actions “unacceptable.” While flag burning is a constitutionally protected action under the First Amendment, the mayor said the injury to public property was an act intended to provoke.

“This property damage caused by at least one of the people present on Sunday falls outside the bounds of peaceful protesting,” he said.

Protesters have been marching throughout the downtown area for 18 weeks, rain or shine, since June 3. They have regularly congregated outside the IPD station for hours on Sundays to protest police officer behavior and the department budget.?

In recent weeks, protesters have continued to agitate community members with their tactics, such as taunting civilians, blocking traffic and baiting Back the Blue protesters outside of the police department. One incident in particular saw protesters surrounding cars and led to a scuffle between protesters and an intervening party which resulted in several injuries.

In his statement, the mayor said that a protest is not just an inconvenience, it’s also a sign of a functioning democracy — a position he’s restated numerous times online throughout the summer.?

“As long as there is no property damage and no threats to safety – for example hindering the ability of ambulances to respond to medical emergencies, or preventing fire trucks from responding to a fire – then the rights of protesters should be respected,” he said. “The history of America is a history of protests, and it is through protest - including the first American protest in Boston Harbor – that political change has come in this country...However, I am appealing to those of you who are protesting for issues dear to your hearts to do so in a peaceful and productive manner. Acts of vandalism and violence will only distract from any meaningful progress.”

He also highlighted the efforts of the police department, which has worked to keep protesters and the larger community safe amid a crime spike this summer. He mentioned the rigorous screening process the IPD has implemented and the patience and professionalism officers have demonstrated over the last 18 weeks.

“I want to commend our Officers for their professionalism, and the commitment they’ve shown to continually improving the IPD, and the IPD’s relationship with the black community. For recognizing that there is deep mistrust, and that it is incumbent on law enforcement to build that trust through word and deeds, he said. “They have not used any force nor made a single arrest under circumstances that could have provoked both. IPD officers have also worked with extreme diligence to provide traffic barriers and traffic control to protect the protestors from motorists, even while the protestors are hurling taunts or insults at the individual officers.”

In a Facebook statement from the Police Benevolent Association, a spokesperson for the non-profit stated that a lack of repercussions for the protesters’ actions, plus little public admonishment, has led to low morale among police officers.?

“The lack of support is the hardest hitting and most consistent complaint that I have heard from our officers,” it said. “The officers have repeatedly expressed their feeling of being viewed as a ‘necessary evil’ by the City government.

The statement raised attention to the rising crime within the City and suggested the spike was attributed to bail reform and public sentiment, adding that officers have become unwilling to proactively address crimes due to a lack of support from City government.

“Our officers are afraid to take enforcement action for fear that they will be left unsupported publicly if the incident is not viewed as politically correct,” it states. “Each and every week a small group of destructionists organizes a rally cloaked as a protest. These have regularly included hate-filled speech directed at our officers, thrown paint at our building, spread an unknown powder around the entrances, tagged the sidewalk and street in front of our station with spray paint, destroyed the American Flag, blocked our emergency vehicles in place with physical barriers, poured candle wax on door handles, written vulgar anti-police messages in wax on the ground, physically layed down across the entrances to our parking lots blocking vehicles from leaving, discarded a Uhaul truckload of furniture in the side lot, and refused to meet and discuss any of the topics that are being rallied for or protested.”

theyre feeling like a necessary evil bcs they ARE that! please spend our money on counselors, daycare providers, sumer camps, tutors, professional training, mental health services... literally anything other than policing will do wonders

Taunting civilians, blocking traffic, surrounding cars.... "functioning democracy" until it comes up the hill for you.