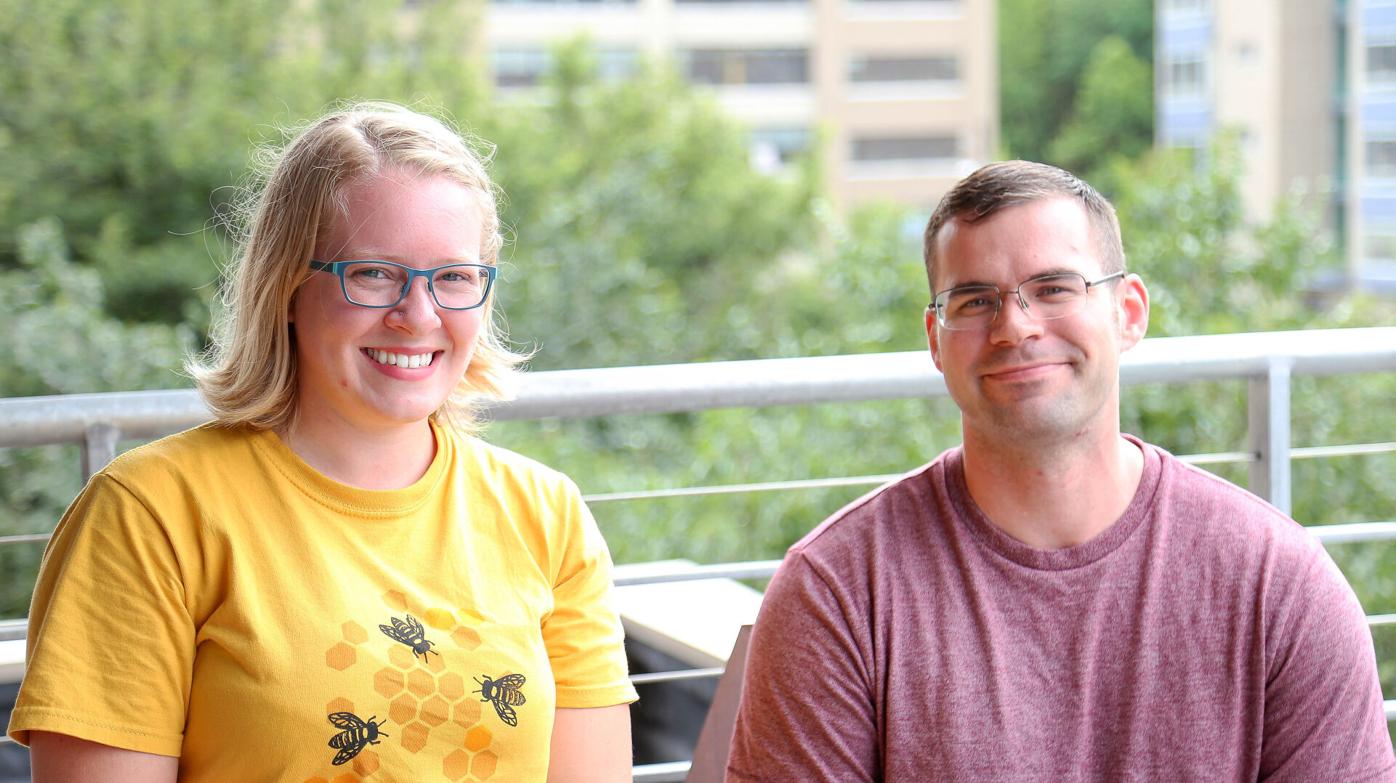 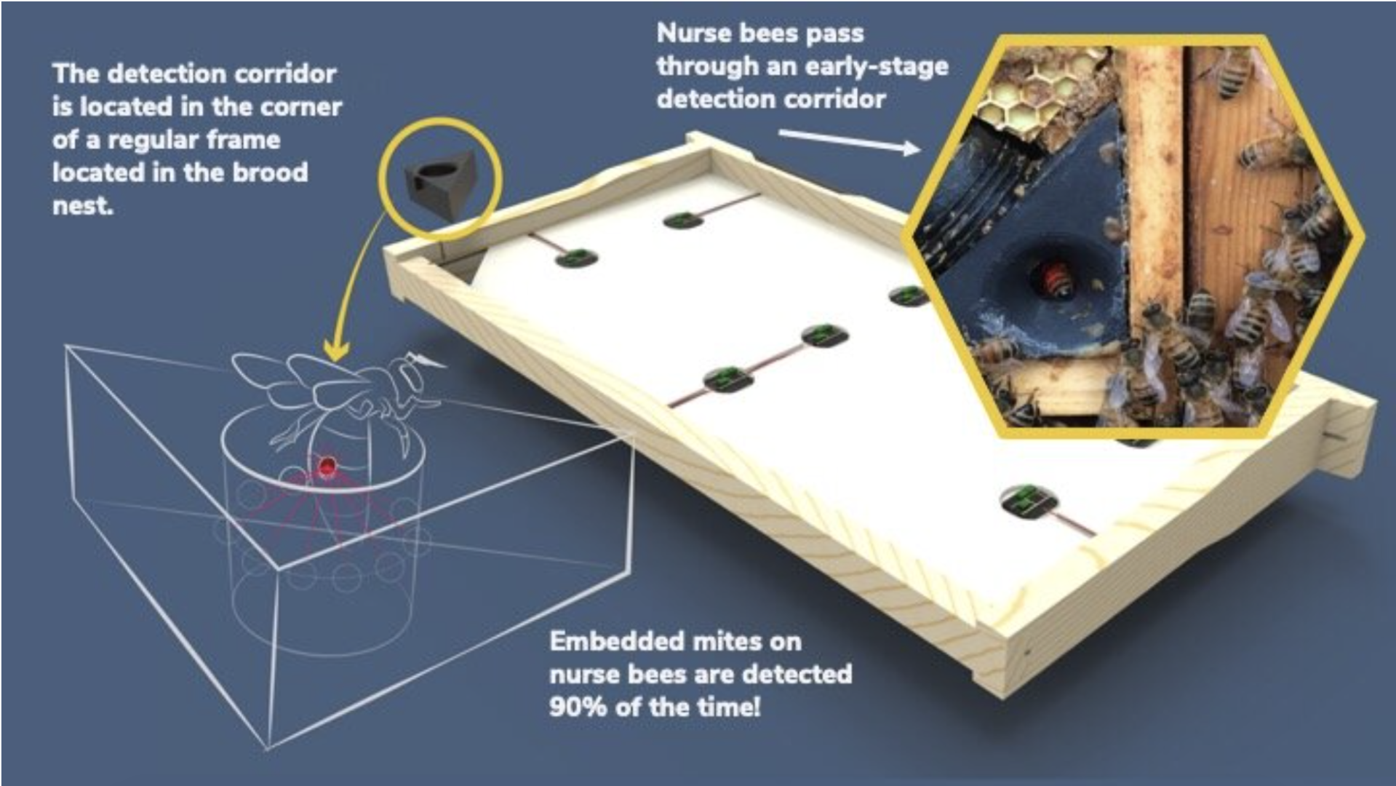 Bees? What are they good for? Absolutely everything!

This summer varroa mites were listed by the USDA as the number one stressor to bee colonies— contributing to the loss of 42.3 percent of all colonies of five or more. Hailey Scofield and Nathan Oakes, founders of Combplex, bee-lieve their new technology can drive those numbers down.

Oakes and Scofield have been working on a patented varroa mite detector since 2018. The process of removing the parasitic insects is like “laser hair removal gone slightly wrong”— for bees, Scofield described. On Monday, the Combplex team finished the 2020 NYSERDA 76West Competition as finalists, securing $500,000 for their business venture.

Taking on varroa mites wasn't the Cornell grad’s first idea, Scofield said. When they began working together after taking a Bug and Game Theory crossover course at Cornell University in 2016, they thought that the answer to solving collapsing bee colonies was remote technology that could monitor the temperature of bee hives and alert keepers ahead of time of potential collapse.?

After traveling across the country and speaking with large commercial beekeepers through I-CORP, Nate learned that while a remote technology interested beekeepers, it didn’t address all of their concerns— especially a more deadly one.

“Nathan traveled across the U.S. and found out something that we already knew— that varroa mites were the biggest problem beekeepers were dealing with and until there was a more practical management solution for varroa mites,” Scofield said, “beekeepers didn’t really have the bandwidth to entertain a novel data-driven device. [Our first idea] didn’t solve enough problems for them.”

Oakes’ design uses light reflection and color recognition to distinguish the mites apart from healthy bees. Scofield explained that the system is essentially a hive frame base that is designed similarly to the way bees nests are organized to encourage bees to use the device. She added that a healthy dose of beeswax is also essential for the project to work.?

Exit ways from where larvae are kept and often infected use light to screen the bees as they pass through. If the optical mechanism detects the reddish-brown mite a laser zaps it, disorienting the host for a three-count and exploding the parasite. The system is effective at locating the mites 90% of the time.?

The idea is both an exciting alternative to the traditional infestation treatments, and it provides far less hands-on interference with the hive, Scofield said.?

“There hasn’t been a lot of changes in beekeeping for— I’d definitely say the last 200 years in terms of the equipment we use,” Scofield said.?

On Monday, Combplex became one of four finalists to win the 76West 2020 Competition, which initially opened with 183 contestants in June. Along with AGREATE and COI Energy Services, Combplex was awarded a $500,000 prize to go towards substantially growing their business and employment within the Southern Tier region. The one million dollar prize was awarded to a Montreal, Canada based company, ThermoAI.

"The 76West Competition creates compelling opportunities for companies from around the world to partner with us at the forefront of climate change strategies,” Governor? Andrew Cuomo said. “We congratulate the winners, who will help us build a stronger, greener and more sustainable empire state for future generations."?

Scofield said the next steps for Combplex are to make sure their laser is compliant with FDA regulations and then make more devices. Currently, Scofield and her team have been creating the handful of frames they have by hand. She said they intend to enter the market in the spring.

“We hope to bring transparency to the pollinator marketplace. When beekeepers have really healthy bees or a farmer has a really pollinator-friendly farmland, we can actually ensure the agreement that farmers have with beekeepers, we can help make sure the prices actually reflect the real value of the landscape and that relationship.”?

Interesting concept. Zapping varroa mites with a laser would be tricky. They actually hide in a bees folds. Be great if it worked, be even greater if the beekeepers could afford it. Something to watch

We have set up a special page to organize our coverage of the coronavirus pandemic. Click below for the latest updates and information.