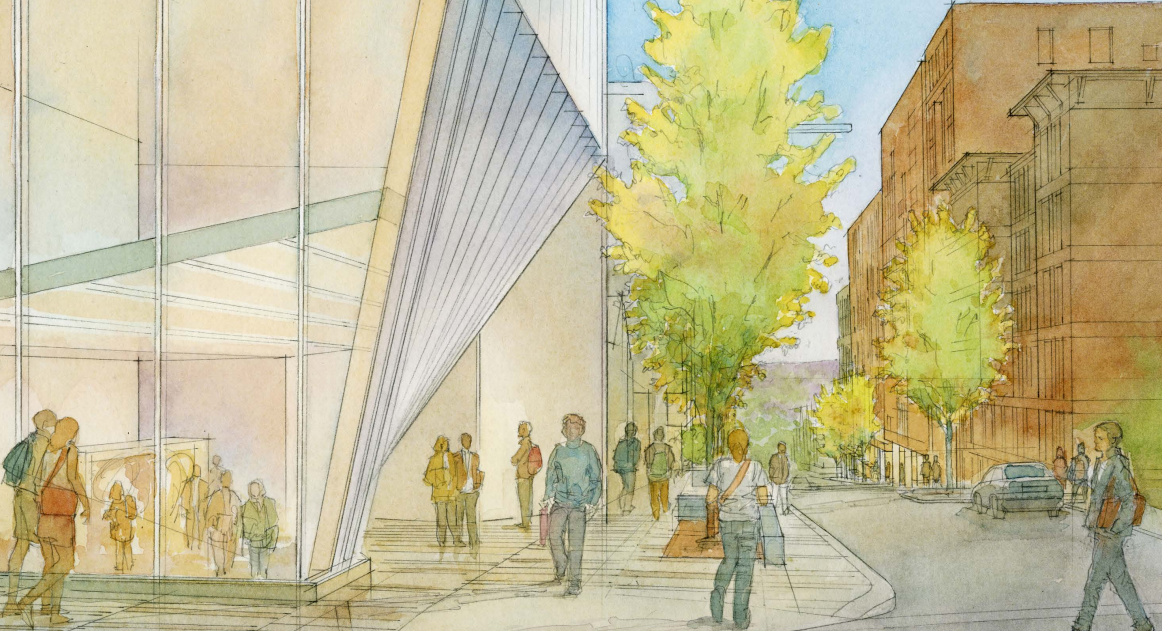 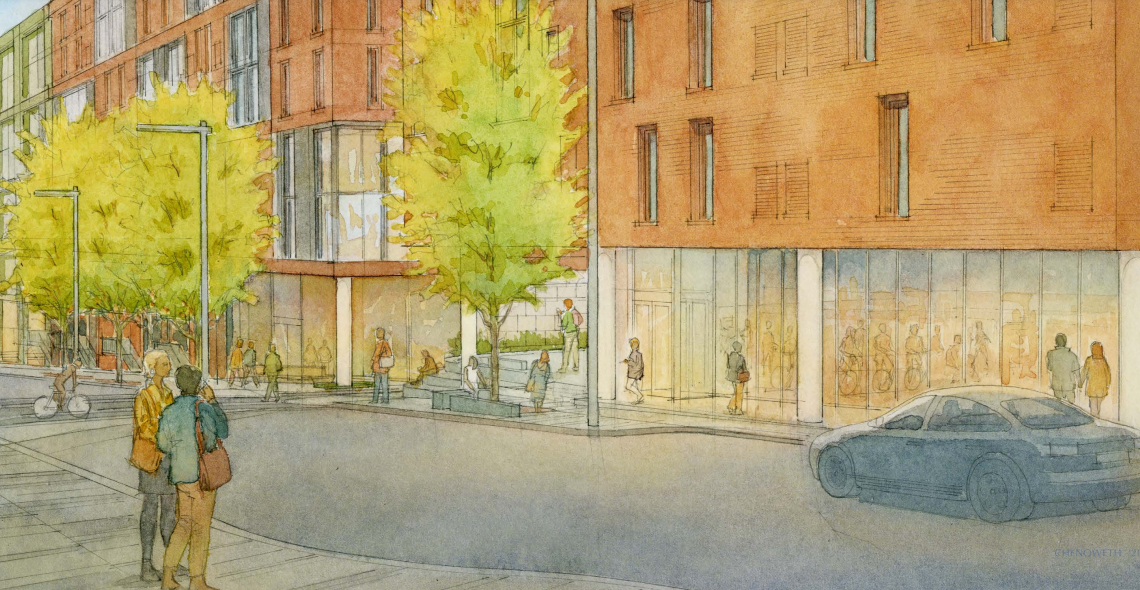 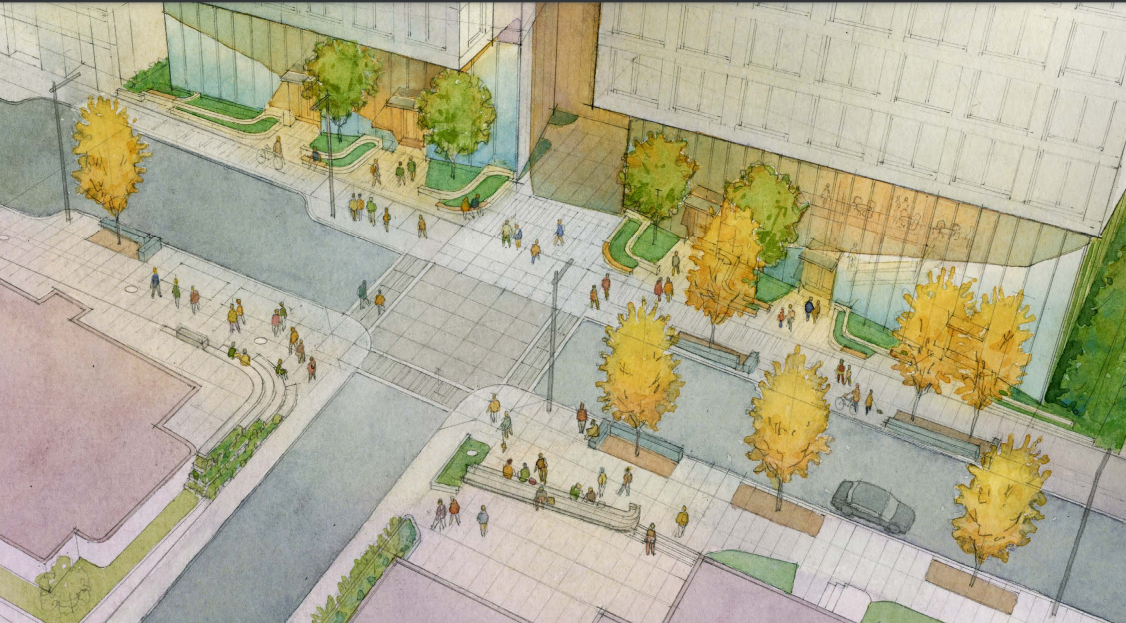 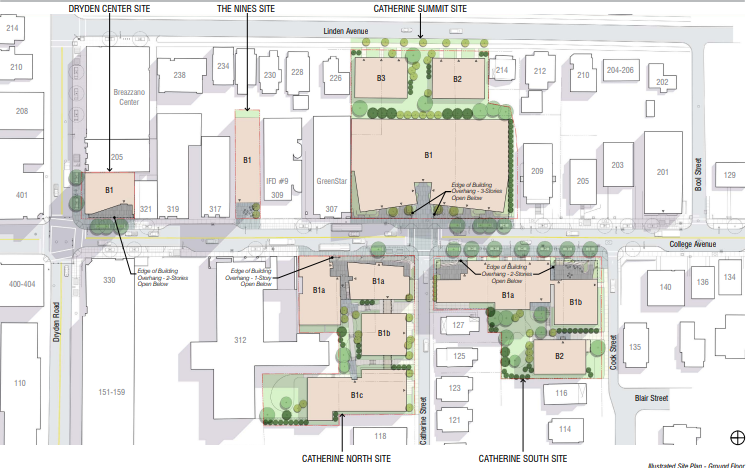 ITHACA, NY -- A group representing Novarr-Mackesey presented their vision for a revitalization of Collegetown to the Planning and Economic Development Committee on Nov. 18 as the first step of its application for a Planned Unit Development. The plans comprise 10 buildings, eight of which would require height variances, along College Ave., with Dryden Road as the northern boundary and Cook Street the southern boundary.

The 10 buildings are split into sections, with the Dryden Center building on the corner of Dryden Road and College Ave acting as the so-called “landmark building.” The other portions are called Catherine North, Catherine South, The Nines and Catherine Summit.

The Nines site is proposed as a mixed-use development, with activated use on the ground floor. It’s proposed at 108 feet tall, 28 feet over the allowed 80 feet, and 10 stories instead of the allowed six.

Catherine Summit comprises three parcels. One would be a mixed use building and the other two would be residential buildings along Linden Avenue. The buildings are in different zones with different requirements; all three buildings are proposed at 108 feet, which is over the current allowances of 80 and 70 feet, and 10 stories instead of the allowed six and five stories.

Kathryn Wolf from Trowbridge Wolf Michaels Landscape Architects said the hope of the development is to create a new employment center, transform Collegetown, widen the sidewalks and add pedestrian areas, and create a 24/7, 365-day-a-year economy.

“It diversifies the workforce and that is the foundation of the success of this project and of Collegetown,” she said. “This will increase consumer demand for neighborhood services and restaurants. It will make new commercial activity viable.”

The committee was receptive to the idea, but not without questions. Particularly, multiple committee members asked for specifics about where the proposed 360 added jobs would really be coming from. According to Phil Proujansky from Cayuga Venture Fund and a partner on the project, the hope is to bring new businesses to town who might want to be close to Cornell.

“Our hope and expectation is that we will be able to bring some tech-related company jobs, both transfers and startups, to Collegetown,” he said. “We’ve had success with this in the past and we believe this will work in Collegetown. Our hope is that the same people who are working there will be living there and become permanent residents.”

However, committee members pushed for the group to come up with something more concrete.

“My concern is that the jobs plan seems vague to me,” member Ducson Nguyen said. “’If we buid it they will come’ is not convincing enough. I’d like some more meat behind those strategies.”

Committee member Cynthia Brock said she felt the Dryden Center building at 12 stories was too tall, and that the proposed pedestrian areas were unwelcoming.

“The open spaces you have along College Ave are very much within the footprint of the building,” she said. “They have overhangs and it feels like a private space […] I don’t think of it as a public amenity the way you talk about it as one.”

?There was also some concern about the character of Collegetown from board member Donna Fleming.

“What about the people who would miss the charming, human-scale, small town feel of Collegetown?” Fleming asked. “What do we say to constituents who bemoan the increase of massive buildings?”

Arvind Tikku from ikon.5 architects said that things are going to change anyway, and planning for it would ensure Collegetown remains an attractive place for people.

“There’s already an understanding that the two-story single-family residences are no longer viable in these places,” he said. “I think the issue is for the vitality of this environment, it needs to change. And that change is not an ad hoc change, but a well-designed and well-planned change that accommodates the inhabitants of the area.”

Mayor Svante Myrick agreed with Tikku, and said Collegetown is in need of improvement.

“I lived there for a decade, I wore out my welcome, and I really do feel that same sense of loss,” he said. “But there’s a reason people only stayed there for a few years […] It’s expensive, unsafe and unclean. The quality of life in that neighborhood is too poor and has been too poor for too long […] Just because Collegetown is getting taller doesn’t mean it has to get uglier. I think this is an opportunity for the neighborhood to be better looking, even if it’s getting bigger.”

Collegetown's been getting "re-imagined" since the late 1970s. Unless you were here then to see what C-Town was like in that era, maybe you shouldn't make claims about "re-imagining" anything